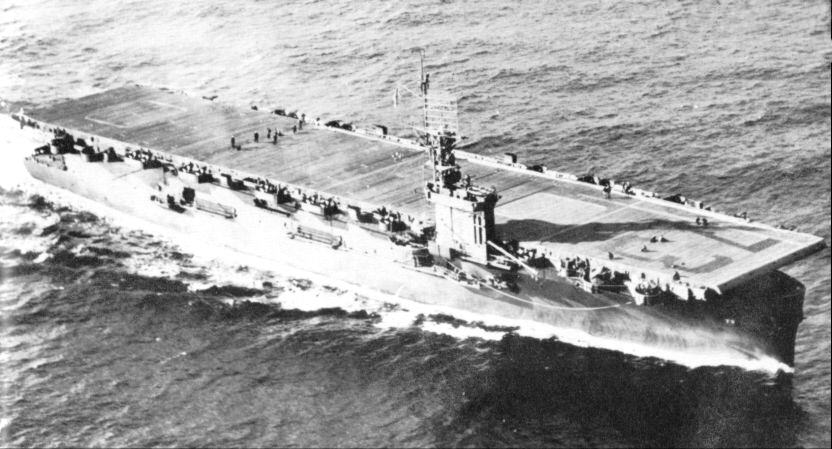 CAPT McGraw scored his first confirmed aerial victory while flying an FM-2 Wildcat on June 18, 1944 off the island of Guam when he shot down a Mitsubishi G4M “Betty” Bomber. On October 24, 1944, during the Battle of Leyte Gulf in the Philippines, the USS Gambier Bay was sunk by Japanese cruisers off the island of Samar, though McGraw himself was personally victorious over two Kawasaki Ki-48 “Lily” light bombers. The following day, flying with VC-80 from the USS Manila Bay, McGraw shot down an Aichi D3A “Val” dive bomber and a Mitsubishi A6M “Zeke” fighter, making him the first and only VC-10 fighter ace. During his World War II career he flew some 50 missions and was shot down once. His official score is listed as 5 confirmed victories, 3 probable victories, and 3 aircraft damaged.

The following are reports given by (then) Ensign Joseph D. McGraw regarding is involvement in the Battle of Leyte Gulf. The full report with accounts from many of the VC-10 pilots is available from here. 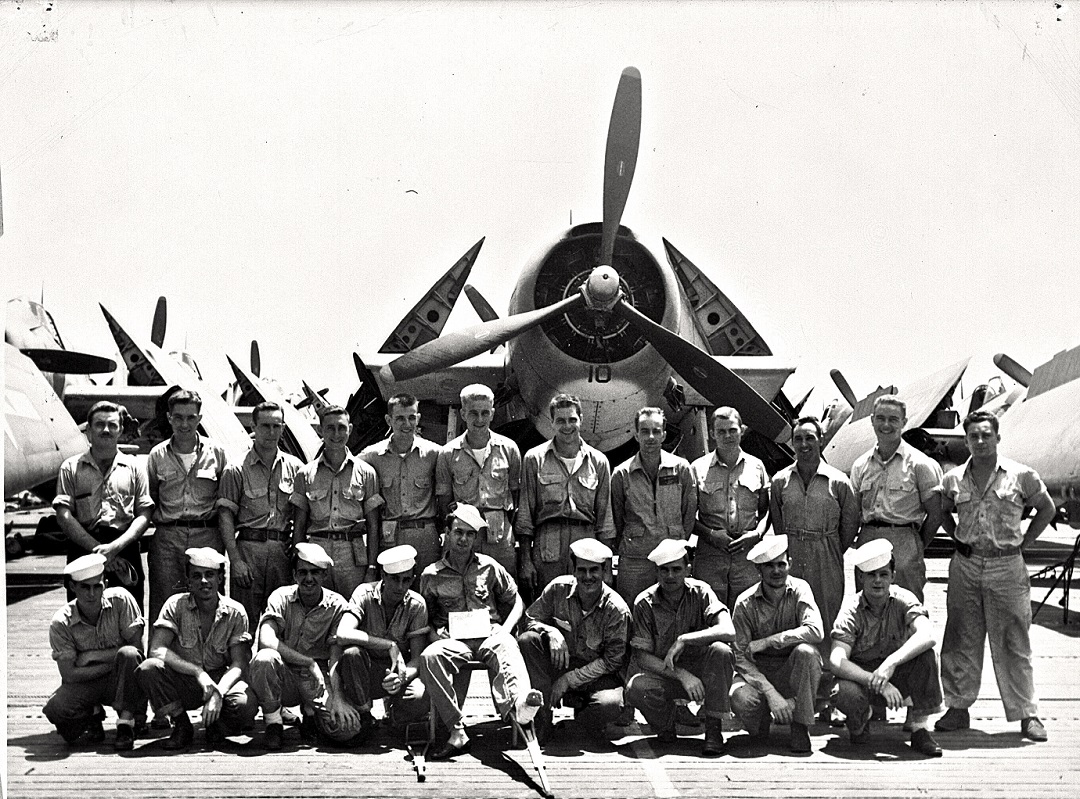 Our VF division was catapulted at 0500. We joined up and departed from over the lead destroyer. We arrived on station at about 0525, and patrolled from Point KING to Point NAN. At about 0800 over point KING a large bogie was reported We started climbing at full military power as we were only at about 4000’. We had been chasing a bogie on the deck which turned out to be a TBM. We tally hoed three SALLY’s high above us (about 12000’), and Lt. Seitz and Ens. Dugan, his wingman overtook two of them to shoot them down a few miles west of Tacloban Town. I was unable to close within firing range. I think the third SALLY was also shot down by a VC-10 fighter.

During the chase I became separated from my section leader, so I joined up on Lt. Seitz. We circled at point KING again until Lt. Seitz was forced to leave due to shortage of fuel. I remained on station as I still had about 65 gallons. At about 0840 a large bogie was reported coming in at point KING, high. Just then a large formation of twin-engine bombers was tally hoed.. I was at 10,000’, and as I climbed to 13,000’ I sighted about 21 LILLY’s in close formation headed for Leyte Gulf at 15,000’.

I made my first run on a section of LILLY’s, low, and on the starboard side of the formation. I fired a long burst at mid-range of about 200 yards at the section leader from a full deflection down to about 30 degrees.

My tracers were hitting the starboard side of the fuselage just aft of the cockpit, but he seemed to suffer no serious damage.

Then I concentrated my fire at his wingman at about 100 yards range. After a long burst from 20 degree deflection to almost dead astern, that went into his starboard engine and wing root, the LILY burst into flames, and dropped out of the formation. Just as he fell, in flames, his starboard wing came off. Just as the LILY burst into flames another FM-2 zoomed very close underneath me-coming from my left. He may have been firing at the same LILY as I-although I saw no other tracers. There was no return fire from this plane, although the dorsal hatch was opened. He made no evasive action-but held in formation. His speed was 160-170 knots, and mine was from 180-200 IAS.

I recovered to the right of the bombers and made another beam run from the starboard, this time on a lone LILY low and on the starboard side of the formation. I fired a long burst from full deflection down to about 30 degrees, and observed hits on the fuselage and cockpit. I then sucked in behind and fired another long burst at his port engine, which exploded and caught fire. Then I fired into his port wing roots, which also flamed. As the LILY dropped off on his left wing, I rolled to the left. As I did the rear hatch gunner scored 8 hits on my plane, although none did any serious damage. The LILY continued its roll and spun-in in flames.

I recovered on the left side of the remaining bombers, and I now saw only six left. I made two more runs on the rear LILLY’s but observed no real damage from my fire. Three more of the bombers were shot down by other fighters, two were in flames, before they arrived over the transports in the Gulf. As the remaining three bombers dove thru the thin layers of clouds over the ships, the ships’ AA opened fire. I pulled out to the left and headed back to point NAN. I observed two planes crash into the water that had probably been hit by our AA fire, and one was close alongside a large landing ship just off shore.

At Point NAN I joined up with Lt. Seitz, who had turned back, and Lt.(jg) Hunting. As we were all quite low on fuel we headed for our base. I landed aboard with from 8-10 gallons at 0930.

A second account from the following day describes Ensign McGraw's engagement with the Japanese Naval Fleet, including a Fusō-class Battleship (BB), Tone-class (and other) Heavy Cruisers (CA), Light Cruisers (CL), and Destroyers (DD).

General Quarters sounded at about 0700 and we manned all our aircraft. I took off at about 0705 and joined our VT and escorted them to the Jap Fleet which was then shelling our carriers. At about 0725 we hit their ships. I made about 11 strafing runs on one BB (Judged to be a FUSO class) and three CA’s one of which was a TONE. I started the first runs at 8000’ and I used a little cloud cover at this height and started succeeding runs at 6000’-pulling out usually at about 1000’ and sometimes to about 600’. Their AA at lower levels was fairly heavy but inaccurate.

Before leaving I observed a CA turning to port and apparently badly damaged. I also saw one of our carriers dropping far behind the rest-she was being heavily shelled and smoking badly.

I landed aboard the USS MANILA BAY at about 1000 with only five to 8 gallons of gas. I had come in on the ZB.

At 1115 we were launched again to make a major attack on the Jap fleet. Cripples were to be ignored. Comdr. Fowler of VC-5 was leading this flight. We encountered the Japs off the coast of Samar about 20 miles. There were at least 2 BB, four CA or CL and 7 or eight DD. At about 1245 we attacked this group. I strafed the lead BB which I saw hit with bombs amidships-by Comdr. Fowler, I believe, and I then strafed a CA on the other side of the BB as I pulled out and then a DD in the outer screen. I continued on my way to the rendezvous area. On the way back to the MANILA BAY, we passed a Jap BB dead in the water and down at the stern, a CA listing to port and 1 DD apparently un hit. There was a pilot near them in the water in his life raft. A BB was circling nearby. I landed aboard the USS MANILA BAY at about 1415.

At 1500 I took off from the USS MANILA BAY as section leader of an eight plane flight on local CAP mission around TG 77.4.2. At about 1615 we were vectored out about 30 miles where I tally hoed 18-20 Vals with 10-12 Zekes as escort. We made a high side run on the Vals who were in a formation of V’s-line astern. There were two Zekes on each side and about six above them.

In the first run, my wingman shot a Val down in flames, and the plane I shot at dove down in front of me and I continued to shoot at him until he flamed and broke up. The Zekes had followed us down and had closed enough to shoot at us in our dives. The Zekes tracers went over my right wing, missing me. I rolled over in a steep, diving right turn and lost him. Then Lt. Fischer, the division leader called on the radio saying that he had been hit and was going to make a water landing. I did not see him after that. He was later picked up by a fast BB unit (?).

When I recovered from my dive at about 3500’, I climbed back up to find myself directly beneath the leader of the VAL formation, which had turned and was heading back toward Luzon-course about 270. I climbed up ahead and to their right to make another pass. I found one Zeke between myself and the Vals. As I turned and started in on my run, the Zeke slowly turned into me. He had a belly tank. I still had my left wing tank which I could not release. I had the altitude advantage so I fired first and held the trigger down. The Zeke did not seem to try to raise its nose and fire at me. When he was only a few feet in front of me, his engine exploded and fire and smoke came out. His prop started to windmill slowly. I pulled around to get on his tail as he passed underneath me. He continued on a little way, then made a slow nose-down left turn. He entered a glide with his engine smoking and prop wind milling slowly. He never pulled out, but held that angle of dive until he hit the water. 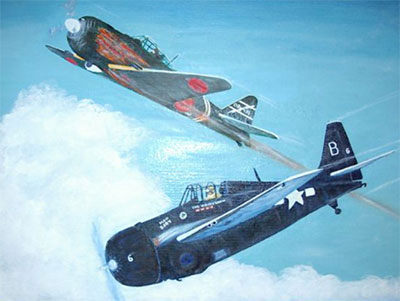 Painting by CAPT McGraw depicts the fifth enemy aircraft that he shot down.

I then started looking for the Vals again, but they had disappeared into a line of clouds. As I came through these clouds, I was climbing, and, on breaking into the clear, I sighted six planes high above me at about 6000’. I was then at about 2500’. They were flying our type of division-four plane formation. I climbed to recognize them and at about 4000’ saw that they had belly tanks and round wing tips and were Zekes. There were no Vals around. I dove away and headed back toward the ship. I later met my wingman and the division leader’s wingman searching several oil slicks in the water. I counted 8 of them. We joined up and came in to land at 1800. The score for our flight was three certains-2 Vals and one Zeke. Lt. Fischer may have downed a plane, but I don’t know.